What is Authentically Korean? or, A Visit to Yangdong Folk Village (Year 3, Day 22) 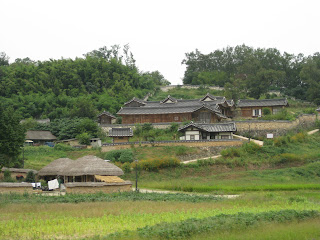 Yandong Folk Village
Recently, my co-teacher, Mr. Kim, invited me along on a recruitment trip to a middle school in Pohang. "Afterwards, we can visit Yangdong Folk Village. Have you been to Yangdong Folk Village?" he asked. I've been to many folk villages. "Mr. Son's ancestors lived at this one. If you have time, how about going there?" Well, I've never been a recruitment trip, and the personal connection with the village could make it more interesting. Sure, why not?
The recruitment trip was uneventful. The way the teachers kept talking while the students listened unconfidently to the pitch reminded me of when military recruiters would come to my high school when I was "of age."
The village on the other hand was quite interesting, if for no other reason than Mr. Son offered this little tidbit on the way up to the village. 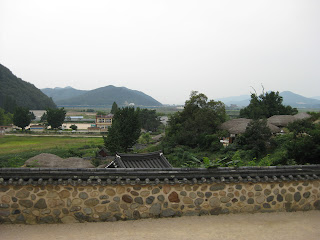 Can you see the church? Neither could I.
"This church used to be inside the village, but the government ordered it to move." Oh, really? "Yes. It did not exist during the Joseon dynasty," the dynasty which the village was supposed to reflect. I see. 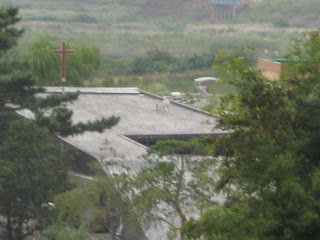 There it is! Behind the tree with a non-descript roof so it won't disturb history. 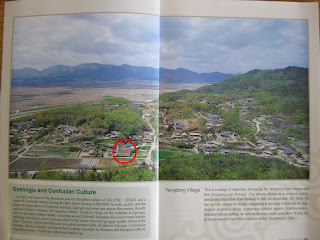 According to the handy tourist guide, we can extrapolate where it used to be!
Notice the location in the middle of town and the bright red roof.
Isn't photographic history fun?
That seemed reasonable enough. I've just recently finished reading Henderson's Korea: The Politics of the Vortex, a book that, among other things, discusses the Korean national character or what it means to be truly Korean. I'm reading a book right now that just came out this Spring called Seoul: A Window into Korean Culture that indeed is at least giving me a view into the author's, Mr. Choi's, window on Korean culture. Both delve into what is the authentic Korean, the former primarily in terms of his or her social-political character, the later in terms of his or her aesthetic character.
But in reading both books and in taking in their respective perspectives, I have to ask, What is authentically Korean? This has been an especially poignant question for me since reading Konrad Lawson's "Why not Teach Us Hwatu?" in the 2008 Fulbright Korea Review. In the article, Mr. Lawson wonders at the cultural components of Korean language classes designed for foreigners living in Korea, classes that I myself have attended many times. These cultural components tend to place a heavy emphasis on things authentically Korean, games like yutnori (윷놀이)and traditional musical styles like pansori (판소리), while neglecting more modern imports like Go-Stop (고스톱) and Trot (트로트). He speculates that since these imports reflect past imperial oppression, especially at the hands of the Japanese, Korean teachers are loathe to teach them. This would seem logical enough if it were not for the fact that Go-Stop and Trot appear to be infinitely more popular in Korea than yutnori and pansori, and thus would be a boon to those trying to learn Korean as it would help them make friends.
I myself had some experience with this. When I asked my Korean tutor in Pyeongchang to teach me Go-Stop since she said she knew the rules, she said, "I'd rather not." Why? "Because it's not really Korean. It's from Japan."
Fair enough. There is a terribly brutal history between the two countries, and many Koreans tend to feel a mix of shame, anger, and saddness over that occupation period.
Perhaps this tendency towards seeking the "authentic" and "genuine" in one's own culture is natural in largely homogeneous nations with profoundly deep histories not built on the need for massive immigrant populations. Perhaps it is only because I'm from America--a nation with few traditional customs, dress, or lifestyles that apply to any specific group, much less to the nation as a whole--that I cannot imagine throwing out mariachi music or Indian food just because it doesn't reflect my ethnic background. After all, if we started doing that, there'd be no American culture left, or at least, granting that America has developed some wonderful additions to world culture of its own accord, far less than there was before.
And, being the historically interested fellow that I am, I can understand the need for accuracy in the presentation of a cultural exhibit. Still, walking through the village, I couldn't help but notice something. Tell me if anything looks out of place. 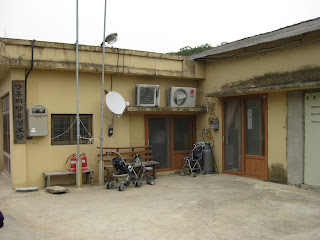 I'll give you a hint. LG, satellites, and plastic all come from the 20th century... 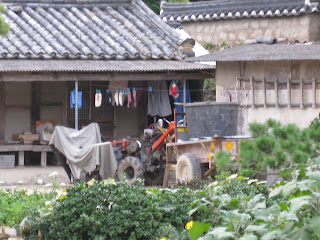 Tractors are a bit earlier, but not diesel tractors with internal combustion engines.
There was also a horse, which makes sense. This is a farming community. Traditional Joseon society was primarily agrarian. But, I've gotten to know the difference between northeast Asian horses and European horses. Asian horses tend to be squat and powerful. He was most certainly not Asian, much less Korean. 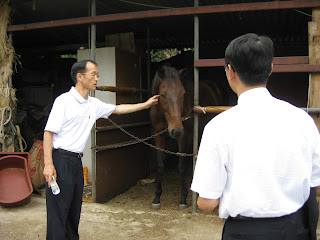 So, why is it that all these manifestations of foreign influence are allowed in the village, but the church is not? Why can we have the electrical convenience, but not spiritual? When I asked Mr. Kim about this, disclaiming that he of course did not know the exact reasons, he speculated that a few factors could have been involved.
The church does not reflect Joseon architecture. Seodang on the other hand could be allowed because they reflect Korean Confucianism. He was unsure at this point whether it was just the physical building that was the problem or the teaching that happens inside the building as well. Also, while everyone needs electricity for good health and survival, not everyone uses the church.
This becomes an even more interesting question for me for two reasons. The first is, Does the church represent a break from Korean culture? and the second is, If we are to base the village on the traditional Joseon dynasty, are we allowed to determine a certain time period within Joseon in order to eliminate that break?
The first question interests me because, from what I have seen, Koreans have made the church an integral part of their culture. Christianity is a recognized religion in Korea and, depending on which data sets you are using, comprises between 26% and 49% of the current population, and even at 26%, they are about equal to the number of Buddhist adherents. (There are few admitted adherents of Confucianism and Shamanism left, though you can find them.) And, although the church may have originally been an import, it is a far cry from that import as it is practiced today. Koreans have made the church their own. As I have observed it, it is legalist, prosperity gospel driven, and, perhaps most poignant, nationalist. The last sermon I heard at a Korean church insisted that God had chosen Korea to convert China so that China could then convert the world and Korea could control the world through China. Not all Korean churches are like this, of course, but the point is that Korean Christianity is Korean.
The second question--whether we can modify the inclusive dates of the Joseon dynasty--interests me because Christianity began making inroads into Korea during the Joseon dynasty, albeit rather late. The Joseon dynasty lasted from 1392 to Japan's annexation of Korea in 1910. The first Christian in Korea actually came over during the Hideyoshi invasion (Not exactly an ideal way to start...) in 1593. In 1603, the first missionary came over from China and began disseminating literature. It is important to note that this first missionary was not from the West and was in fact Korean. However, the successful planting of churches and the first big numbers do not occur until 1784. From that point on, though the church is persecuted, it flourishes, and it does so within the context of Joseon culture.
Now, I won't argue that Christianity isn't an import. I am however concerned about Korea's tendency to erase aspects of its history that it doesn't find particularly reflective of its culture or history, or perhaps more appropriately, of what it wants those things to be. Why not have a memorial sign outside the church explaining what it is doing in the middle of the village?
Mr. Choi, the author of that book on Seoul I mentioned above, also has concerns about this, but for something much closer to the Korean psyche. If you decide to hike up Namsan in Seoul, you might come upon a small clearing with a fountain within a well shaded grove. However, unless you know what this grove used to be, you will never realize that it was the site of Japan's Shinto shrine worshiping the Emperor. After the occupation, it was demolished and a small garden was planted in its place. Yet there is no sign to indicate what the place is. No plaque. No educational guide. No shame. You will, however, see the statue of a Korean patriot who assassinated the governor-general from Japan.
It's concerning because the powers that be in Korea (and throughout the world, not least of all in my own country, America) want to present a certain history to you, a history that conveniently ignores certain truths about its past to present a traditional culture that satisfies its own perspective on Korea's traditional national identity. This identity, all present evidence to the contrary, doesn't include imports like Christianity, though it is more than happy to include air conditioning units made by LG.
Then again, it's not as if everyday Koreans won't talk with you about these things or aren't aware of them. My co-teacher was fine with explaining the situation of the church with me. When I visited a fellow teacher's host family last year, they were more than happy to show me how to play Go-Stop.
Posted by Didactic Dad at 12:21 PM