The Legend of Bokbunja, a Korean Raspberry Wine (Year 3, Day 15) 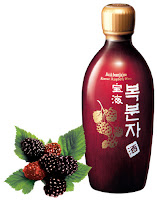 This, my friends, is bokbunja (복분자), a Korean wine made from raspberries. Although it is sweet, to me it tastes a little like cough syrup. Still, it's better than the usual local swill by far and can be found for no great cost at most moderately priced restaurants here.
As the entry for bokbunja on Wikipedia will tell you, the drink is supposed to promote both health and male sexual stamina. Now, in Korea, many things are supposed to do this, and men are especially interested in increasing their stamina, or at least in telling me that a particular food we are eating at the time will accomplish this for us. (For the record, I've only eaten two of those three linked foods.)
Whenever a Korean man tells me that something or rather is supposed to have the same effect as chomping on little blue pills, I usually put on a confiding grin and say, "Oh, really? And why is that?" The usual response is, "I don't know. People just say that."
Not so when my adult English class and I partook of bokbunja over a meal of raw fish and tempura. With bokbunja, I got a story.
But before I tell the story, it is important to know what bok, bun, and ja mean. All three are hanja, or borrowed Chinese characters. The first is 복 (覆) and can be roughly translated as "flip"; the second, 분 (盆) as "pot"; and the third, 자 (子) as "person".
And now the story.
A long time ago, a farmer was picking raspberries, and, deciding that they'd make a pretty tasty brew, proceeded to make a lovely liquor out of them. He had his fill of the delightfully delectable drink that night and promptly passed out. Having neglected to relieve himself before setting himself to repose and having slept quite soundly the night through, he of course had to release the pressure, so to speak, upon waking up the next morning. So, he dragged himself over to the chamber pot and relieved his aching bladder. The stream had such great power that the pot flipped over, needlessly fertilizing the ondol floor of his thatched roof hut, but inspiring him to christen the cause of his new found male virility, bokbunja, or, roughly translated, "It'll make a man flip his pot!"
To me, this would seem to speak more to the beverage's powers as a diuretic than its qualities for enhancing "male stamina".
Posted by Didactic Dad at 4:07 PM