English is a confusing language, and it is made more so by things like this: 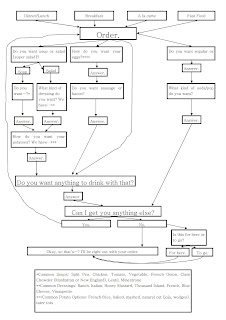 Beauty in simplicity. That was not dumbed down in anyway. That is exactly how it happens.
We Americans speak in a code that defies comprehension when we perform such menial tasks as ordering food. It gets to the point that a foreigner visiting America is actually scared away from from frequenting restaurants at all.
One of the biology teachers at this school once attended a summer seminar at Michigan State University. He tried ordering a burger at a fast food joint. He never stepped foot in a restaurant again for his entire month's stay. Instead, he subsided on bread and milk in his dormitory room.
"Jeremy, what did they say to me that day?" was his haunted inquiry. "Well, my friend, that depends on if you were ordering breakfast or lunch..."
Thus the flow chart that took an entire 50 minutes to explain.
* * *
Boggled
Students exhausted by study sit before my eyes. Partially my fault, I, ashamed, admit. Writing is too hard because "Teacher, I am boring!" (He means bored, of course, but comprehension and thus communication accomplished, I am loathe to correct his agonized plea.) A game we shall play! I announce today. A cube I shake to their Whoops! and Hurrays!
Students rattle the cube, stare through the plastic dome, and distinguish letters faded through poor manufacture and subsequent misuse, yet functional. They ditinguish letters, then words, then points, then penalties, then another round, and so on. Their minds have been set free for a brief half-hour. It is enough despite this. Recharged, stretched in a different way of viewing the world (or at least the words), I escape to my hovel. They retrieve books from lockers. We smile, breathe before returning to work, fully boggled.
Posted by Didactic Dad at 11:48 AM