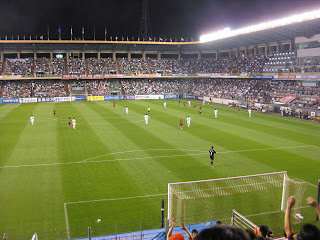 Soccer - The football that's actually played with the foot.
I like sports, but not like most American guys like sports. Don't get me wrong. Put a leather clad ball of whatever kind in front of me, and I'll run, tackle, jump, pass, shoot, or whatever else we're supposed to be doing like the rest of them. I love that part of sports.

What I don't like is the sitting in the armchair, speculating on which team is going to win, knowing every player's name and stats, and yelling coaching tips at the TV part of sports. Except for big games like the Superbowl, the NCAA Basketball Tournament, and maybe the World Series, if sports is on the TV, I change the channel to watch something more stimulating. That's just how I roll.

Going to watch sports in a stadium, on the other hand, that I'm all for. The atmosphere is what gets me. The cheering people, the open air (when outdoors, that is), the vendors and hawkers, the smell and yes the stink of it all is just wonderful. It makes me feel as much like I'm a part of the game as watching on TV makes me feel disembodied from it. Heck, I'll even watch baseball, to my mind the single least exciting sport on American television, if we're going to a stadium. 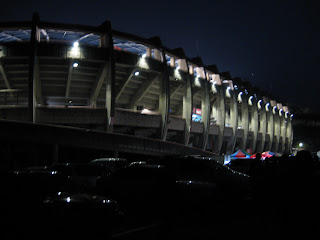 Pictured: My only reason for being a spectator. (The Pohang Steelers' Steelyard Stadium)
The only trouble is that in Korea my options are extremely limited. I can go to basketball games, which are rarely well enough attended to make them interesting, baseball games, which are rarely interesting in and of themselves regardless of the number of spectators, or I can go to soccer matches. In Pohang, that trio of opportunities becomes a despicable solo. That's right. Pohang has one sport offering. Soccer. Whoo. Hoo.

Soccer is probably the least American sport in the world, both by popularity and by competency. Much like the Scots consider basketball to be a game for lasses, Americans, according to Chuck Klostermann, consider soccer to be a game of mediocrity only fit for elementary school children who haven't developed the muscular strength, the hand-eye coordination, or the competitive spirit and will to play our real sports. Stereotypically, our moms take us to soccer pitches. Our dads take us to the battlegrounds of the field, court, and gridiron.

Even the language of soccer is all wrong for American sports. A pitch? Please. And a match? I have news for you, matches in America recall the mano a mano brutality of boxing or at least the agility, finesse, and strategy of tennis. Calling sporting events "games" recalls the honor and prestige of Olympic competitions both modern and ancient, feats of strength and will and endurance. They are a test of the human spirit! All a soccer match brings back for us is memories of aimlessly and awkwardly kicking a ball in the general direction of a goal larger than the size of my bedroom wall and still not making it in--all this while our mothers and fathers discussed the most recent series for the baseball home team or the chances the local high school football team has of making the playoffs that year.

So, yes, despite the dirt cheap admission price, it took me a while to get out to a soccer game.

Last week Wednesday was my first one, and I only have one thing to say about the experience: I loved it. 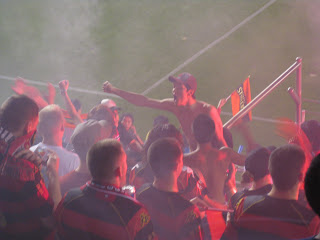 And so did this guy! (One of the cheerleaders. In Korea, this is not a misnomer. He actually led cheers.)

Allow me to elaborate. American sporting events have nothing on Korean ones for what I referred to earlier as "atmosphere". Forget the Seventh Inning Stretch, no one at these games sits down. Ever. Towards the end of the match, I couldn't keep up and had to sit down momentarily to give my legs a rest.

And the cheers? The cheers are amazing. Rather than just shouting random inarticulate phrases like, "Go!" "Come on!" and the unfortunately-popularized-by-Rob-Schneider-speaking-in-a-Hispanic-accent "You can do it!", we had a veritable repertoire of chants and even full fledged songs with verses to choose from. At the head of each section was a cheerleader, usually wearing the colors of the home team (the alternative being nothing but his pants). I assume this person was just a fan (or perhaps it is better to use the etymological source, "fanatic") of the team, but he led his section with incomparable ardor and zeal. The cheerleaders would even work together, taking cues from each other about when to start different songs, cheers, or actions like the wave. (Yes, they do that here too.) 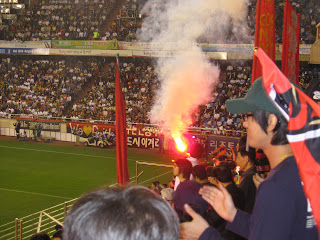 In terms of the club itself, it makes sure to give the fans the materials needed to ensure the appropriate mood. At the entrance to the stadium, each patron was bestowed with a flag for enthusiastic waving. And waved they were. Some fans even brought their own over-sized flags and banners. This flag was collected at the end of the match, though it was no trouble to keep it as a souvenir if one so desired. Around the field were written slogans declaring the spirit of the game--"Your spirit makes our blood boil!" "Soccer is war!" "My pride is here!" "Dokdo is Pohang's responsibility to protect!" and so on and so forth. (Actually, I'm not quite sure that last one was appropriate at the game. It'd be kind of like someone having a "Let's win in Afghanistan!" sign at a basketball game in the states. I mean, I agree with the sentiment, but at a sporting event? Really?) 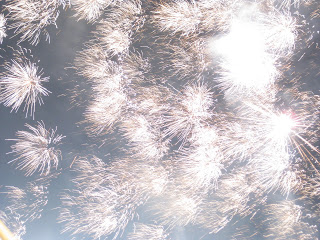 And then there's the adoration of the fans for the individual players. They are loved. They are cheered on no matter what. If you make a goal, the throbbing masses will shout your name in unison while raising their hands in victory for at least a minute if not more. If you even make an attempt but miss, they will still praise your effort and will to win in the same manner. Everyone has their favorites, and much as is the custom in America, you can tell by the jerseys which they wear proudly. One was hard pressed to find a person without a jersey or at least the appropriate colors in our section. Upon a bad call by a referee or the possibility of a goal by the other team, the most outrageous cacophony of noise erupts from the stands. In this stadium, the audience really is the extra man on the field.

Goals are not only celebrated with lofty adoration, but with fireworks as well, and we were treated with a mini-show upon each and every one. Fans get in on the action as well by lighting flares.

After coming home from the game, which in itself was the most exciting sporting event I've ever witnessed in person, I enthusiastically posted the following to my wall:

The Steelers win against the Busan Pride, 5-1. MOST EXCITING SOCCER GAME EVER!!! I will have to go again. (hangs head in shame)

A good friend of mine, in jest, then cast this barb at my American pride:

'Most exciting soccer game ever.' So, like, it was almost as exciting as the most boring baseball/basketball/American football/watching paint dry/etc. game ever?

It's a fair question. You may question my sanity with this new found love of mine, thinking I have somehow lost my American-ness or what have you, but consider this. Take a closer look at this picture:

Remember this guy?
Do you see that row of men in the foreground of the picture, and the row directly behind them, and ye, even unto the row behind them? Notice that they all wear the red and the black jerseys (and the expensive ones at that), that some even have the team's towel scarfs, that they stand ready to cheer at the direction of the craziest cheerleader. That sturdy bunch, that motley crew, the rowdiest of the rowdy fans--they are the United States Marines.

When the U.S. Marines, arguably the most American, macho, and hardened of all possible spectating groups, are cheering for a sporting event, it's gotta be an event worth cheering for.
Posted by Didactic Dad at 9:10 PM