One of my favorite past times here is playing Ultimate. For the non-initiated, Ultimate is an amalgam of different sports that's easy to learn and exceptionally hard to master if only because it's played with a disc that will either fly away or stop in mid-air depending on the direction the wind is going. There are end-zones like American football, constant running like basketball, and team-play like soccer (or football, if you prefer). Usually, it's a non-contact sport, and a congenial one at that (Even high level events are self-officiated). It's very popular with college aged kids in the States, and apparently with Whites in general. You might be surprised to learn that it's a popular activity in Korea, and indeed I would be too because it isn't, at least not among actual Koreans.

Expats on the other hand love it, and some cities actually have tournaments in not full out leagues. Jeju-do, Korea's island paradise, has international tournaments with teams even flying in from such exotic locales as Idaho, USA. One friend told me that the league in Seoul is so competitive that you actually have to know what your doing or you'll get chewed out by the other players on your team. There are friendly pick up games too, of course, but in the expat crowd, Ultimate is serious business.

Here in Pohang, we usually have a modest--some might say impoverished--showing of about 8 people on a good week, although two weeks ago we had as many as 14. Sometimes, the numbers are as low as 5. It's not enough to host tournaments or to have leagues, but we still have a blast playing our quick 5-point games, and it's something we look forward to every week. In fact, I'm rather disappointed when we don't get a game going, but that's Ultimate for you, I guess.

One of the biggest obstacles to playing Ultimate is finding a place to play. We used to play on POSTECH's soccer field. It was spacious, flat, and well-maintained. The only trouble with this was incurring the ire of locals who wanted to use the field for its intended purpose; that is, soccer. Go figure.

Now, we use a rather narrow and short field near POSTECH's campus. The terrain is rough, the grass is rarely mowed, and because it's surrounded on trees, it has the dual disadvantages of debris on the field and the creation of a wind tunnel that invariably blows directly against one of the teams.

It also has the disadvantage of being in a scenic locale. This makes it a prime place to take pictures for portraits, have church picnics, and just go for a plain old walk through the middle of the field. This is presumably because the soccer field is unavailable for these activities as well. This is a problem because when you're playing a game with a disc that, in a skilled thrower's hands, can cross the length of a soccer field, there's a potential that people in the vicinity could get nailed in the head with one.

Now, when a church group is there playing, we move to the other end of the field. When a group of children are shooting pictures in hanbok for their portraits, we try to make our field a little shorter. If a group has decided that the best place to do either of these is smack dab in the middle of the field, we politely ask if they might mind using one end of the field instead. We understand about sharing space, and everyone can enjoy their respective activities that way.

A lot of Koreans on the other hand do not seem to have the same concerns about shared space that we do; or, to phrase it another way, Western society believes in sharing space, not time, and Koreans believe in sharing both.

Let's say, for instance, that you are walking along with your spouse and two kids and see a group of people playing a game. The game involves running, jumping, and throwing a large white disc at each others' heads. You see that the game space is marked out with cones indicating boundaries of play.

A) ask the people if they might stop the game momentarily so that you can pass quickly to the other side of the field?
B) walk around the field thereby avoiding any unnecessary contact?
C) walk through the middle of the field at a slow pace without apologizing and nearly get clobbered by a player a time and a half your size?

If you picked C, I need to talk to you about imperiling your life and your elementary aged daughter's life as well.

Let's take another example. Let us say that this time you are leading a small group of children in some traditional activities and games. They are having a grand old time of it. A group of strapping athletes approaches you and asks if you wouldn't mind using one end of the field so that they can set up their weekly game. You acquiesce, the children continue their activity, and the players start their game. During the game, the children begin to stray onto the playing field.

A) ask the children nicely to come back over the play area?
B) order the children to return the prescribed zone at once? Their lives are in peril!
C) leave them be (they're just children after all), smiling all the while, until the players stop their game and come over and tell the children that it's dangerous themselves?

If you answered C, I need to talk to you about placing other people's children in peril.

This isn't confined to our Ultimate games either. When I practice shooting basketball, I often have children walk through the court in front of me, sometimes even stopping right under the basket that is my intended target and then just stare at me. (Actually, given my accuracy, that's probably the safest place for them.) Adults are not immune to this either, and although they won't stand directly under the basket, they will walk in front of me in herds on their way out of the elementary school where I sometimes practice. No apologies, no rush, just a person moving from point A to point B by the most direct course--a straight line.

In the States it's a little different, and, while I'm not sure about the rest of the Western world, I imagine the same case might hold. At an early age, I was instilled with the wisdom to avoid running out onto basketball courts when games were in progress, that I shouldn't have my picnic on an active soccer field whether defined by chalk lines or cones, and that I should always ask permission before crossing through someone's campsite.

I mean, we even apologize or ask to be excused for passing in front of someone's line of vision at a store with narrow aisles! Let's face it, there's only one way through and that way is in front of the other person. Aren't we basically saying, "I apologize for the limitations of space-time and the cramped interior design of this room"?

I think there are two things going on here. One is that Koreans have a different conception of shared space. As I said before, Koreans don't necessarily consider occupied space to be off limits. If it's in a public area, then your Ultimate game will have to deal with the picnic that's smack dab in the middle of it. That's just something I've had to get used to over here. If a person bumps into you on the subway, there's no apology because it'd basically be saying, "I apologize for the limitations of space-time and for the fact that my country is 15.7 times more densely populated than yours, but hey, at least I'm not blocking your view in the aisle!"

(Actually, over the summer while I was visiting Seattle with my cousin, we noticed a Korean tour bus in the vicinity that I deftly translated for her. Later, in the Pike Place Market, a densely built, hunched, Asian woman practically bowled my cousin over without a word of apology and continued on her merry way. My cousin just stared after her in utter disbelief, and I grinned at her and said, "Don't worry about it. I guarantee you she's Korean, and that's just how they role over there.")

But what's more reflectively interesting to me is the second thing that's going on, and it's a new experience for me.

This is mere speculation, but remember when I said that Ultimate isn't popular with Koreans? It would be better to say that Koreans just don't understand about Ultimate. I don't mean that they can't comprehend the rules, in fact a few Koreans play with us and quite well. I have even taught some of my students to play as a cultural lesson. I mean that, as an imported game that is almost exclusively played amongst expatriates, they don't get how important it is for those that enjoy the game to have uninterrupted play. For them, it's just a goofy thing that the foreigners do every once in a while. It isn't anything past that, and, since it is unknown, doesn't garner respect. By marking out the space on the field, we don't actually reserve it because, when you try to explain the game to a Korean, they say, "That's ridiculous! It sounds boring." (I often have the same reaction when someone mentions baseball, actually.)

Let's put this in perspective. Imagine that you play tennis. One day you come to your regular tennis court that you've played on every weekday after work for a whole year and you find that a game of sorts is already in progress. Some foreign men are kicking a soccer ball back and forth across the net, and while it's clear that it's some sort of game they're playing (It has a ball, an obstacle, passing... Seems like a game to me!), it's also fairly clear to you that it's not tennis and has no right being played on a tennis court. You tell them they have to leave so that you can play your game, or you at least scowl at them through your racket as you sit on the bench waiting for them to leave.

The thing is, that game is a real sport called chok-gu, and in Korea is quite popular (It's similar to volleyball). There are televised national tournaments for it, even. It seems ridiculous to us because we've never seen it or never played it, but it's a real thing that just isn't well-recognized in the rest of the world.

Ultimate's the same way here. It's a sport native to my country that, when transplanted, just doesn't register as an organized, team-based activity. In fact, for all intensive purposes, it is just a bunch of strange foreigners having a laugh on a Saturday afternoon.

Still, it'd be nice to have a laugh without running over any bystanders.

By the way, those kids that interrupted our game this weekend? C-U-T-E! Enjoy the pics. 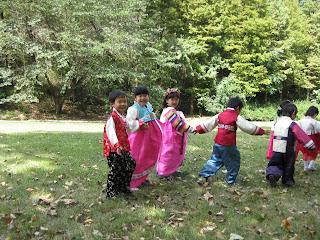 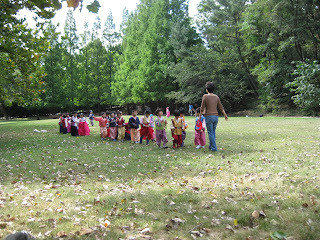 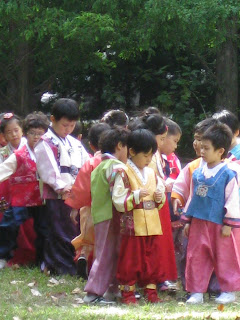