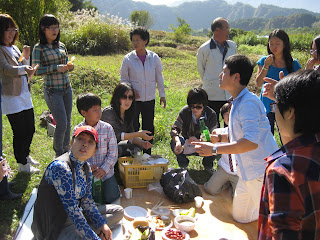 Chuseok is the probably the single biggest holiday in Korea. In terms of activities performed, it's closer to American Thanksgiving Day than Christmas, but in terms of the importance placed on the holiday itself, it is far closer to the latter. As we do for Christmas, people come from all over the country just to celebrate this special occasion with loved ones, and, again as happens with Christmas, stores put a lot of publicity and advertising into the event, selling off their wares in special Chuseok bundles of SPAM and beauty products. It hasn't reached the epic proportions that commercialization of holidays can take in the States here in Korea, but then again, Korea just made the developed nations list last year. Give it some time. I'm sure eventually the ddeok (떡) making rabbit and his frog companion will be handing out Chuseok joy just as much as the big guy in red does in my motherland.

Unfortunately for most foreigners, this holiday means that everything shuts down. Most first timers end up starving from not having stock piled enough ramyeon (라면) packages. Fortunately for me, I had a host family my first year here. I decided that after over a year of being their prodigal son, I would finally return. They were elated.

I've recounted this Chuseok experience before, and I encourage you to read there if you have no idea what the holiday is about. Little happened differently from what went on before, excepting this.

I can speak Korean now.

Modestly, granted, but the ability is there. Whereas before I spent an entire year in silence with my homestay family, this time around I struck up a conversation with my host mother as soon as I entered her shop. (It used to be a video rental/beauty supply shop, but they sold off the video section.) Though the family is still stoic to the point of seeming petrified, I was still able to talk to them more in those few short days than I did during that entire first year and about more serious things to boot. I was able to joke and play with them (especially my host brother who is still the most precocious Korean kid I know) and even keep up with the drinking and the singing! Besides which, I now have a new host sister in the ETA that currently resides with them. (That makes five ETAs in a row that they've hosted!)

I've been invited back again. If nothing else, the whole experience provided closure. Leaving my host family at the end of my year was a very apathetic experience. I said, "I'm going," and they said, "Okay." After working up the courage to text message them asking if I could come and "play" with them during Chuseok ("Play" is the appropriate Korean word.), this was the response I got:

"Come play quickly!! When are you coming?!"

I apparently, I'd made a better impression than I'd thought. I can't wait to visit again!

*Picture: The host family enjoys their meal after performing the traditional rites.